Like football in Los Angeles, the Crummy Little Podcast is back for 2016. Think tank analyst, municipal policy expert, and San Diego Chargers fan Vince Vasquez joins the show to talk about the NFL’s California merry-go-round, which have already put the Rams in LA and looks poised to bring the Chargers north, too.

Vince mixes the pain of a fan probably watching his team leave with the expertise of someone who understands that stadium deals are usually fool’s gold. He also provides great insight into San Diego’s culture and why a football team in Inglewood can’t necessarily count on fans from the former German settlement. 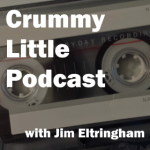